COVID-19 and Changes To Our Practice

We are restarting elective surgery and patient information seminars.

Click here to read the latest changes to our practice.

HomeObesityProblems With The Gastric Band

For many years adjustable gastric banding has been the most frequently performed weight loss surgery in Australia. Unfortunately, there are large number of reports on gastric band failure and long term complication rate. Long term studies report a 40-66% failure rate (not losing enough weight), removal rate of 30%, and 25% rate of reoperation due to complications after 10 years. With over half a million gastric band placed worldwide, the problem with band complications is very big.

When to suspect problems with your gastric band?

"I already have a gastric band what should I do?"

There is a strong evidence that the long term outcome of the gastric band is depends on the intensity and frequency of the follow-up. Band adjustments at the onset of symptoms of problems may reduce the chance of complications and the need to remove the band. Because of the high re-operation rate ( approximately 1 in 3) in patients with gastric bands, all patients are advised to have and maintain top health fund cover to avoid having to self fund future operations.
If you are experiencing symptoms of band complications it is important to see an obesity surgeon who deals with band complications.

Gastric Bands are Removable but Not Truly Reversible!

Proponents of the gastric band often argue that one of the advantages of the gastric band is being reversible since the band can be removed should problems occur. While it is true that the band can be removed, the stomach does not return back to normal after removing the band. A thick band of scar remains on the top part of the stomach where the band was sitting. In addition, suturing the stomach over the band during placement of the band leaves a tunnel after removing the band. This tunnel and scar tissue can compromise the success and safety of further weight loss operations such as sleeve gastrectomy and gastric bypass. For this reason gastric bands showed be viewed as removal but not reversible and this should be taken into consideration before deciding on having gastric band surgery.

There is a growing scientific evidence that waiting 3-6 months after removing the gastric band allows the stomach to recover and the scar tissue to soften before undergoing an alternative weight loss operation. This reduces the complication rate of future operations.

How Gastric Bands Are Removed? 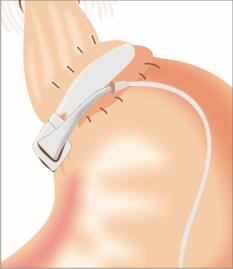 Most gastric bands can be removed laparoscopically (keyhole surgery). In elective situations the operation takes about one hour. The adhesions between the stomach and liver are divided. The sutures warping the stomach over the band cut and the gastric tunnel where the band is sitting is opened fully. The band tubing is divided and band buckle is either undone or divided and the band then removed. The band always leaves a scar on top part of the stomach were the band was sitting. This is divided to allow the stomach to return to a normal shape quicker. At the end of the operation the band injection port and the rest of the tubing are removed from under the skin. Hospital stay is usually for one night and patients can tolerate normal diet almost immediately.
Patients with gastric bands presenting with a major complication such as slip, prolapse or erosion can still have their operation done laparoscopically, however, the operation time and hospital stay are longer.

Occasionally, eroded gastric band can be removed endoscopically with a gastroscope when they do not present as an emergency. For this to be possible the band buckle needs to be visible inside the stomach.

Patients with health insurance will have their operation done as No Gap surgery. This means that you will not recieve a bill from our practice. Instead, we will bill your health fund directly. This applies to the surgery, anaesthetist and assistant fees. You may want to speak to your helath fund to check your cover. The medicare MBS item number for removal of gastric band is 31584.

If you do not have a health insurance you still don't need to worry, Dr Ali Zarrouk will book your operation on his operating list at Campbelltown Public Hospital.

What happens after removal of gastric band without additional weight loss surgery?

Many studies have showed that patients who have their gastric band removed will almost always regain weight and return back to their presurgery weight after 2-3 years. Therefore, it is not advisable to have your band removed without undergoing another weight loss operation such as Sleeve Gastrecotmy or Gastric Bypass.
In my view, replacing a gastric band with another gastric band has a higher failure rate than the original gastric band operation and will further compromise the safety and success of other operations such as sleeve gastrectomy or gastric bypass.

Learn about the diet before weight loss surgery.

Next Webinars is on Tuesday

Learn about the different operations and the course before and after surgery.
Gets answers to your questions.

Click here to read more and how to register.